VIN + OMI is a British sustainable and eco-contemporary luxury fashion label. The next VIN + OMI AW18 fashion show at London Fashion Week will be held at the Andaz Hotel on the 15th February and will launch a new wave of eco textiles developed solely by the brand.


The team have pioneered new ways of working with UK organic materials and have produced a chestnut ‘leather’. Also included will be VIN + OMI’s new range of soft synthetic wool and textiles, produced from salvaged plastic from ocean and river clean up operations.
No - kill Llama and rare breed sheep fleece is also incorporated into the show, this has been collected from smallholders who clip their pets annually while allowing them a full natural lifespan.


VIN + OMI have a large international celebrity following and have worked with public figures from Pamela Anderson to Michelle Obama This show will be introduced via a special installation by Blondie’s Debbie Harry and Matt Katz Bohen . Celebrity models will also walk in the show including UK iconic actress Jane Horrocks and Game of Thrones actress Laura Pradelska, who will walk alongside up and coming rap star Tino Kamal, singer Julius Cowdrey makes his catwalk debut

‘' Everyone wears clothes, it's time we thought about where they came from. I support VIN + OMI’s approach to thoughtful fashion’ Debbie Harry

“ Fashion, like all businesses, need to work hard to keep this planet going” Jane Horrocks


WE ARE NOT SHEEP links to the designer’s work with new wool and also is political message to support individual thinking. This follows on from their last season show, Stop Fucking The Planet which the BBC

Supporting the WE ARE NOT SHEEP theme is leading art brand Daler Rowney who have supported political artist Conor Collins to paint the show’s backdrops. Conor is famed for his portrayal of Donald Tr 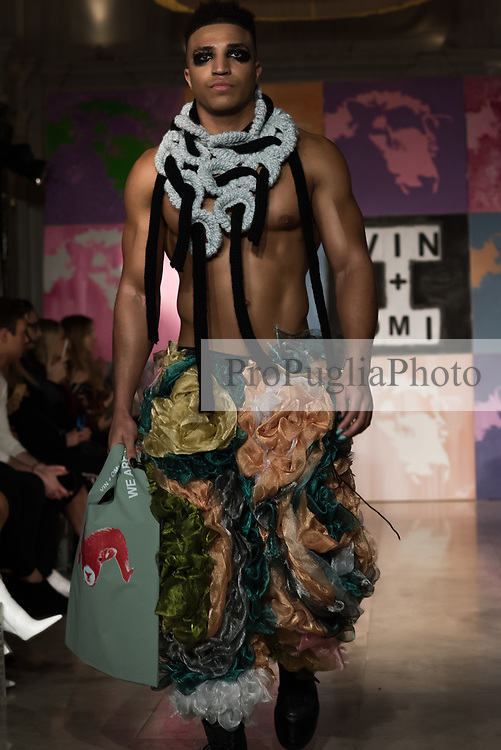